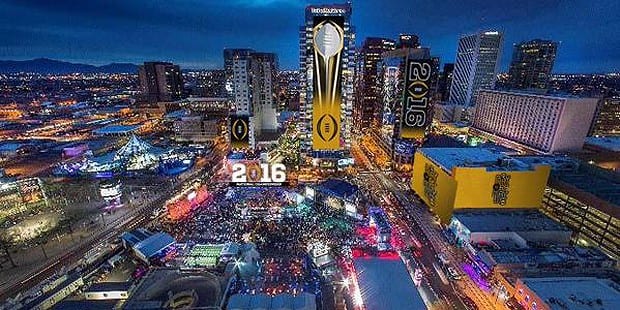 An illustration using a photo taken during Super Bowl Central 2015 in Downtown Phoenix shows what the Championship Campus could look like Jan. 8-10. (Rendering: @cfbplayoff Instagram)

If you like your football with a side of spectacle — including food, family fun, and free concerts — then Downtown Phoenix is your jam Jan. 8-10.

College Football Playoff, the semifinal and championship games that determine college football’s national champion, is only in it’s second year of existence, but it’s already mimicking the NFL’s 50-year-old Super Bowl in turning its title game into an extended weekend of parties and fan activities designed to attract football fans, people-watchers, and really anybody looking for a budget-friendly good time.

While the big game between Alabama and Clemson is happening out in Glendale on Monday, Jan. 11, all of the glitz and hoopla leading up to kickoff is going down in downtown on the College Football Playoff Championship Campus Presented by Ak-Chin Indian Community.

Hungry? In addition to the Northwestern Mutual Taste of the Championship exhibit at Phoenix Convention Center, our downtown restaurants are getting into the game by offering specially priced snacks and sips in conjunction with DTPHX City Sampler.

Hey, what about the football? Easy, Joe Namath. Get your football fix at Playoff Fan Central, a multi-day fan festival giving fans the opportunity to be a part of the College Football Playoff National Championship experience, including media day, performances from Alabama and Clemson’s marching bands, interactive games and celebrity appearances–all in a family-friendly environment. Tickets are extremely affordable, with special rates for kids, seniors, military and large groups.

Other Championship Campus Featured Attractions Include:

Be sure to review Know Before You Go information and if you have any questions about Downtown Phoenix or Championship Campus activities just call the Downtown Phoenix Ambassadors at 602-495-1500.